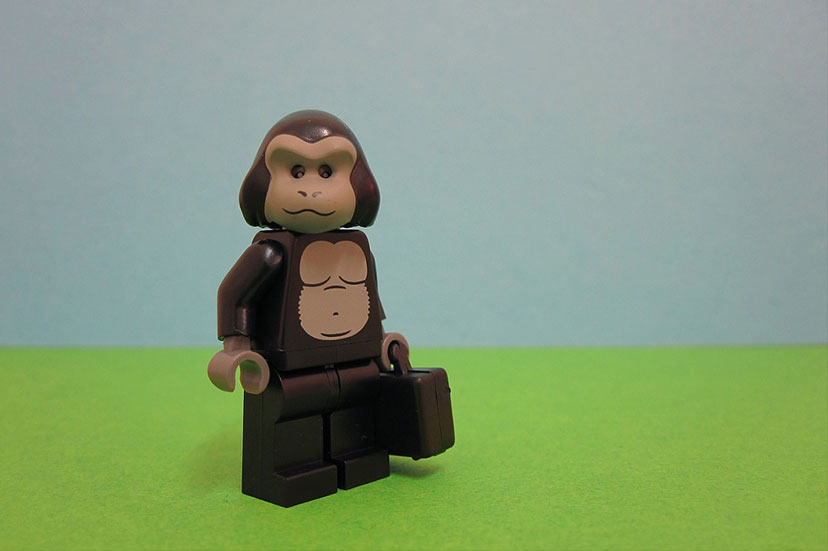 Some interesting business lessons can be learned from the psychology of monkeys.  The video below explores how capuchin monkeys view teamwork and fairness, two fundamental skills to have in the workplace.

There are two fascinating conclusions the experiment demonstrates.

In some of the “dog eat dog” work environments we work in, this video can seem like a polar opposite of how business works in our world.  We all know that person who when given a rock, jar, and some hazelnuts, would leave us hanging despite the help we gave.

It is common to see this in sales.  In my experience, the rare times someone called us with a sales lead, it was a fight to see who would claim the prospect.  There was no consideration for which Account Executive might have had the right kind of experience or knowledge to close the sale.  If a sale did close, the commission was narrowly centered on one person.

Fairness and Our Emotional Intelligence

The second conclusion from the study, has an even deeper meaning when you pair it with a study from the Karolinska Institute and Stockholm School of Economics.

If even monkeys know when they are not being rewarded fairly, how much more do humans recognize it? Brain scientists took that question and explored it further with MRI data.

Their study worked this way.  Take 35 subjects and tell them they are going to play a game with money.  One player is going to suggest to the other player how they will split a fixed sum of money, ie 50/50, 75/25, 90/10.  The second player now chooses whether they accept the offer and take the money, or to reject the offer and prevent either from receiving the reward.

In roughly half the cases, when the second player was offered a smaller share, they rejected the suggestion, which really was COSTING THEM MONEY.

But what does this have to do with Emotional Intelligence? While conducting the experiment researchers had this to say.

Previous research has suggested that the area controlling the ability to analyze and make financial decisions is located in the prefrontal cortex and insula. Using fMRI, however, the researchers saw that the brain area controlling for fast financial decisions was actually located in the amygdala, an evolutionary old and therefore more primitive part of the brain that controls feelings of anger and fear.

That’s right, the amygdala.  The key area of our brain that is involved with emotional intelligence.

What does that mean for us? Think about it this way.  When was the last time you knew you weren’t treated fairly?  How did you feel?  Were you angry, upset, or sad?  How did it affect your work?  Were you distracted, did you want to treat them unfairly in return?

Watching the monkeys, I was afraid the trainer would be attacked if he continued to give Virgil the darn biscuit.  If it were a human he was doing that to, I wouldn’t have felt bad if there was some retaliation.  Again it goes to show, that having fairness in the workplace is crucial.  Understanding emotional triggers such as this, and preventing them will improve workplace productivity exponentially.

How to Apply These Studies in the Workplace

How do you see fairness affecting the work around you?  Are these studies relevant?