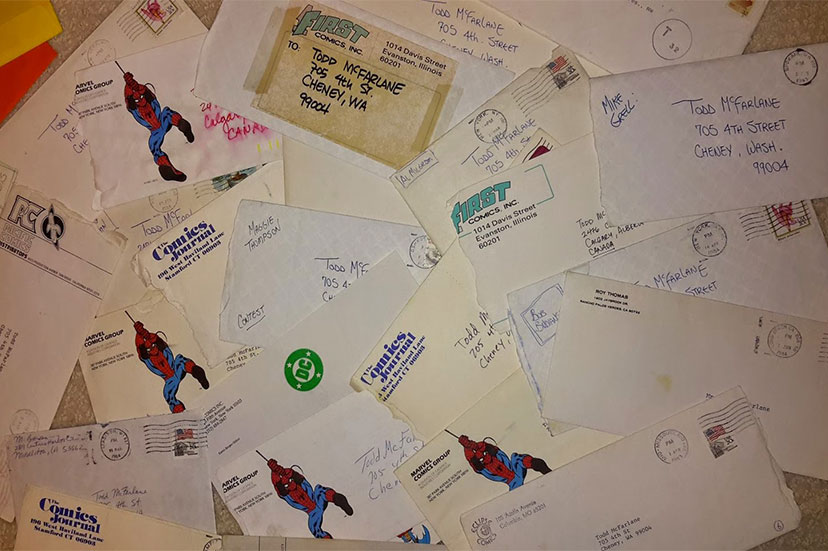 If you ask any comic book fan boy who Todd McFarlane is, you’ll immediately notice a scowl of wonder and shame that one could ask such a question.

But, for the uninitiated, Todd McFarlane was a Canadian comic book artist that was one of a handful of creatives credited for the great comics boom of the nineties.  McFarlane at the time, was known for his work on various comic books including Spider-Man, Spawn, and Hulk.  During his tenure at Marvel, his issue of Spider-Man #1 went on to sell 2.5 million copies.  To put that in perspective, we’re lucky if a comic sells more than 90,000 copies these days.

But it wasn’t always peachy rainbows for McFarlane early on in his career.  Originally, he never planned to work in comics.  After high school, he got a full ride baseball scholarship to Eastern Washington University, and hoped to be a professional athlete, until he had a career ending ankle injury his freshman year.

Once his Plan A fell to pieces, he turned to a hobby he carried on throughout his childhood, drawing superheroes.  He went on to send over 700 submissions of his work to various editors and Marvel and DC before he finally landed his first real job in the comics industry.

Earlier this week, he posted on his Facebook wall a picture of some of the rejection letters he received, including some from Marvel’s then Editor-in-Chief Jim Shooter.  He went on to explain how he stayed motivated through all of the rejections and how someone struggling to find their dream career could learn from his example.

I GOT REJECTED 350 TIMES! AND I HAVE THE LETTERS TO PROVE IT!!! Here’s how I used them for motivation…not depression.

I am posting 3 photos today. The first is a small sampling of some of the rejection letters I would receive from the various companies and people/editors. As you can see there is a range of different companies I sent them to, so nearly all of the corporations printing comics, I would send samples to.

What I would do is draw some pages of different comic characters (about 6 to 18 in each batch). Then I would make about 20 copies of those pages and send them to twenty editors in the business (some of the editors could be working at the same company). 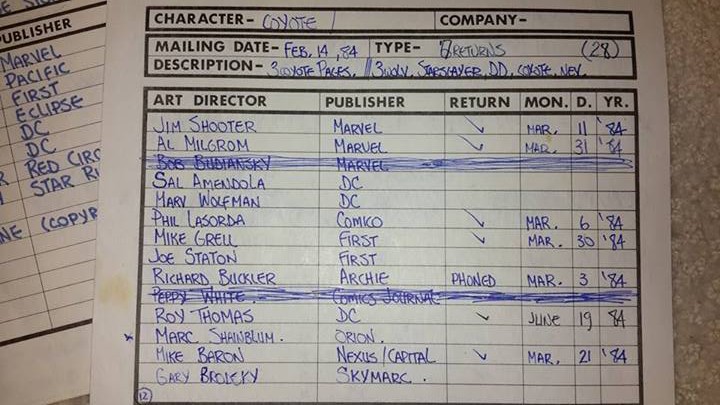 In the second photo, you will see the little chart I made (in one of my college classes. I actually printed them, since there were no laptops or excel programs back then). I listed all the people I sent packages to and then kept track of any responses.

In the third photo you will be able to read one of the ‘rejections’. This particular one came from the head of Marvel Comics, Jim Shooter. I was always flattered when anyone would take the time to look at what I had sent them and would then lick a stamp and send a return note. It is kind of funny that the Marvel envelopes and letterhead had Spider-Man on them, because in a few short years after getting some of these rejections I would actually be drawing the Spidey comic itself.

The positive in getting these letters from editors was that generally they had constructive criticism notes in them (I will show you some of those from time to time). So I was able to take those suggestions and apply them to my next batch of samples. I repeated that method over and over again for about three years until I final caught my break. Sometimes they would even call me on the phone! That was awesome!!!

As I’ve said, it took about 700 sample submissions and about 350 rejection letters before someone finally said “Enough already, Todd. We’ll give you a job!” I think I wore them down with all my submissions.

And the rest, as they say, is history. Been doing comics for nearly 30 years now (having done Batman, Spawn, Hulk, etc). So don’t get discouraged if you don’t get what you want out of life on your very first try. Sometimes it makes you stronger mentally to have to ‘earn’ your way to whatever goal you set for yourself.

In the comments, let me know how you would take the lesson from Todd’s life and apply it in your own career. 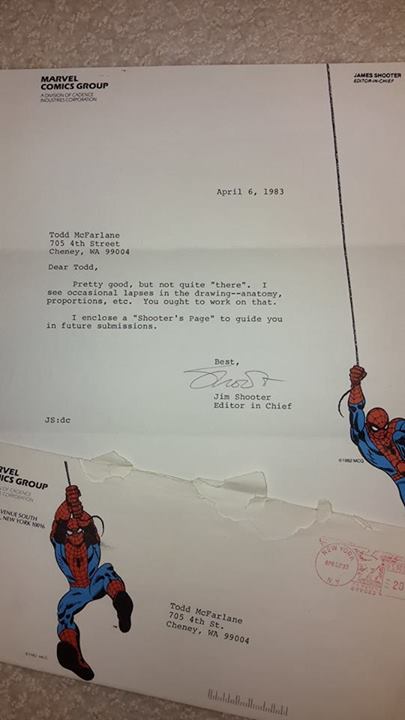