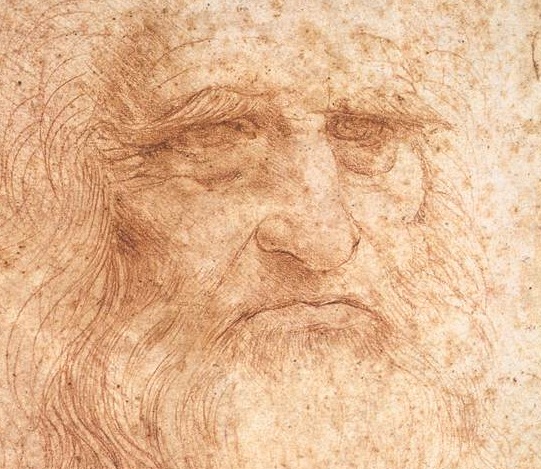 Back in the middle ages you still had many of the same career challenges that you have today.

You could have been the world’s finest painter, mason, or philosopher, but you still had to convince someone to pay you for it. After all, the Duke of Buckingham was probably busy knighting lords and you didn’t have the luxury of sending him a link to your online portfolio.

Oh and don’t even think about hauling over one of the statues you sculpted in his image, those things are heavy.

So what could you do to get a job back then? The same thing you do today, write the good old trusty, centuries old resume.

And if you don’t believe that’s what they did, then here’s a picture of Leonardo’s resume for your own eyes. 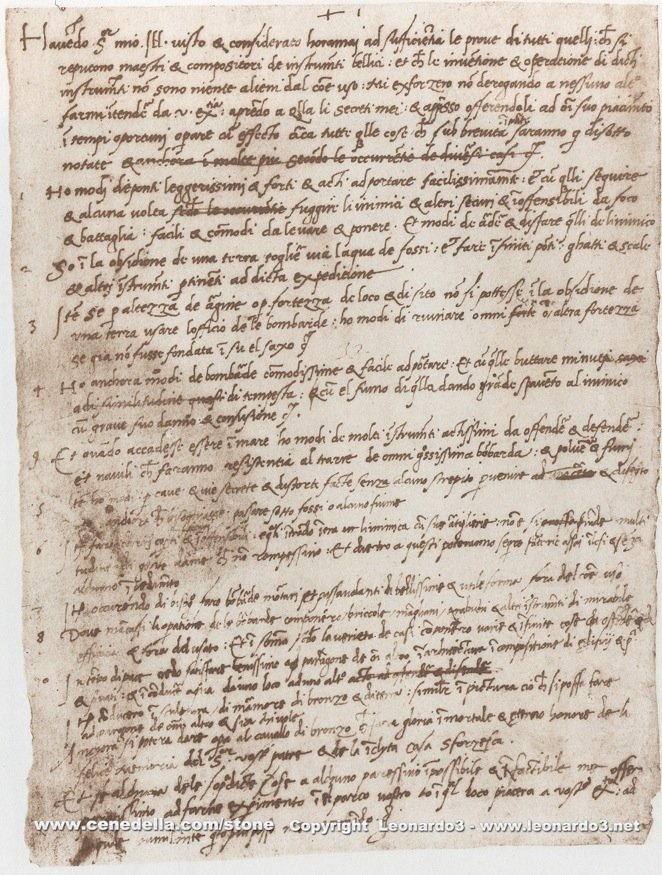 Why Would Leonardo da Vinci Need a Resume?

I’ll share the translation in a second but I thought, now might be a good time for a little history lesson as to why Leonardo was even writing a resume in the first place.

It’s common knowledge that Leonardo had a lot of talents.  But one of the talents he made a living off of was designing weaponry for the noble folk.  Think of him like a medieval Tony Stark.

And so it came to pass that Leonardo came to writing the resume depicted above.  Which was his resume to become the weapons artificer for the Duke of Milan.

Here’s what his resume translates to.

“Most Illustrious Lord, Having now sufficiently considered the specimens of all those who proclaim themselves skilled contrivers of instruments of war, and that the invention and operation of the said instruments are nothing different from those in common use: I shall endeavor, without prejudice to any one else, to explain myself to your Excellency, showing your Lordship my secret, and then offering them to your best pleasure and approbation to work with effect at opportune moments on all those things which, in part, shall be briefly noted below.

1. I have a sort of extremely light and strong bridges, adapted to be most easily carried, and with them you may pursue, and at any time flee from the enemy; and others, secure and indestructible by fire and battle, easy and convenient to lift and place. Also methods of burning and destroying those of the enemy.

2. I know how, when a place is besieged, to take the water out of the trenches, and make endless variety of bridges, and covered ways and ladders, and other machines pertaining to such expeditions.

3. If, by reason of the height of the banks, or the strength of the place and its position, it is impossible, when besieging a place, to avail oneself of the plan of bombardment, I have methods for destroying every rock or other fortress, even if it were founded on a rock, etc.

4. Again, I have kinds of mortars; most convenient and easy to carry; and with these I can fling small stones almost resembling a storm; and with the smoke of these cause great terror to the enemy, to his great detriment and confusion.

5. And if the fight should be at sea I have kinds of many machines most efficient for offense and defense; and vessels which will resist the attack of the largest guns and powder and fumes.

6. I have means by secret and tortuous mines and ways, made without noise, to reach a designated spot, even if it were needed to pass under a trench or a river.

7. I will make covered chariots, safe and unattackable, which, entering among the enemy with their artillery, there is no body of men so great but they would break them. And behind these, infantry could follow quite unhurt and without any hindrance.

8. In case of need I will make big guns, mortars, and light ordnance of fine and useful forms, out of the common type.

9. Where the operation of bombardment might fail, I would contrive catapults, mangonels, trabocchi, and other machines of marvellous efficacy and not in common use. And in short, according to the variety of cases, I can contrive various and endless means of offense and defense.

10. In times of peace I believe I can give perfect satisfaction and to the equal of any other in architecture and the composition of buildings public and private; and in guiding water from one place to another.

11. I can carry out sculpture in marble, bronze, or clay, and also I can do in painting whatever may be done, as well as any other, be he who he may.

Again, the bronze horse may be taken in hand, which is to be to the immortal glory and eternal honor of the prince your father of happy memory, and of the illustrious house of Sforza.

And if any of the above-named things seem to anyone to be impossible or not feasible, I am most ready to make the experiment in your park, or in whatever place may please your Excellency — to whom I comment myself with the utmost humility, etc.”

One of the beauties of reading Da Vinci’s resume is to see how a genius marketed himself before templates, photoshop, and other tools were created to craft the perfect resume.

And what would a resume look like, if we stripped it bare of all the handed down practices that have led up to the fairly typical modern CV?

Secret #1 Market Towards Your Duke’s Needs

Before ever working for Ludovico il Moro, the Duke of Milan, Leonardo was already well accomplished.

He had painted the altarpiece for the Chapel of St. Bernard, he was a qualified master at the Guild of St. Luke by the age of 20, and had already crafted several works of art and war that were well renown.

So why doesn’t he mention any of this?

Because it wouldn’t serve the duke.

Sure, all those accomplishments make Da Vinci look impressive, but how would it help Ludovico?

So instead of talking about himself, Leonardo spoke about what he could do for the duke.  And he didn’t just do this in a simple prose fashion.

He made a list.  Like what you would read on the magazine stand while checking out groceries.

And if you were a duke of the Renaissance period, wouldn’t you like  “mortars that fling stones resembling a storm, vessels which will resist the attack of the largest guns and powder and fumes, and weapons that engulf smoke causing great terror to the enemy, to his great detriment and confusion?”

Lesson: Instead of just listing your accomplishments from all of your previous job experiences, consider listing how you could use those skills to help your future employer.

Today we live through times of economic boom and decline. The medieval equivalent were times of  peace or war.

So how could a weapons artificer convince a duke to keep him employed during times of peace?

Leonardo Da Vinci didn’t want to fall victim to the Renaissance equivalent of a recession, so he made a case of how his talents could benefit the duke in peacetime as well.

In times of peace I believe I can give perfect satisfaction and to the equal of any other in architecture and the composition of buildings public and private; and in guiding water from one place to another.

I can carry out sculpture in marble, bronze, or clay, and also I can do in painting whatever may be done, as well as any other, be he who he may.

Lesson: Business’s are likely to require more from employees these days.  What assets can you provide a company in slow or fast times?  Are your services only useful if they are busy?  Or can you help them do more even in slow times?

Secret #3 End With A Demonstration

These days it’s hard to take a resume for its word.  And I’m sure many people may have felt the same way about what Da Vinci was capable of.

So to ease any concerns the duke might have, Da Vinci left him an offer to demonstrate his services.  If Ludovico wanted a trebuchet built in his park to test Da Vinci’s skills, Leonardo would be there.

Lesson:  What can you do to prove yourself to a potential employee?  Designers, photographers, and artists often put together a portfolio of their work online.  Could you do something similar?