Personality Assessments: What’s the Difference Between Myers-Briggs and DISC? 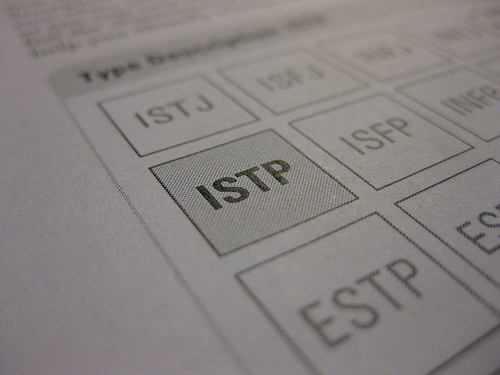 Let’s say today you were finally done treading water in a job that didn’t really make you happy.

You go to a career coach and the first thing they suggest is you take a “personality assessment” so you can better understand what kind of work will appeal to you.  And it’s likely that they’ll recommend one of two choices; DISC or MBTI (Myers-Briggs).

Myers Briggs rings a bell, so you might bite on that.  But are you making a mistake?  Is there something DISC offers that could do a better job of solving your career challenge?

Both assessments have their strengths and weaknesses, and one isn’t necessarily better than another.  It all comes down to two things.

What’s the problem you are trying to solve?  And what’s the best tool for solving it?

So let’s get started.

Origins of MBTI and DISC

The origins of these two assessments are strikingly similar.  They both come from shared roots which then branched out and were expanded on by modern day scientists.

And just to note, several versions and variations have been created for each of these tools.  So we’ll try to compare them as closely as we can to the science behind them and less on individual versions of each of these systems.

The foundation of today’s Myers-Briggs assessments come from the research Dr Carl Jung did in the early 20th century.  One of his most notable theories was his work in defining introversion and extroversion as it’s popularly understood today.

Dr. Jung’s research largely intended to explain both the conscious and unconscious forces affecting behavior and to identify the core personality traits that differentiate among people.  He did this through separating behavior into three “bipolar dimensions“.

Myers and Briggs added to Jung’s three existing elements a fourth one.

Myers and Briggs refined the instruments for measuring these behaviors into 93 forced based questions which make up the Myers-Briggs Type Indicator®.

Like MBTI, the science behind DISC also took inspiration from Jung’s work.  His research on extroversion and introversion were the basic fundamentals of explaining human behavior.

Dr. Marston expanded on these studies with a desire to explain how normal human emotions lead to behavioral differences among people as well as to changes in a person’s behavior from time to time.  And in addition, to take these behaviors of an individual and understand their implications in interpersonal relationships.

Marston similarly to Jung, created a four dimension system for measuring a person’s behaviors.  His included the following.

Since Marston’s work in the 30’s and 40’s several modern day companies and scientists have updated his methods and findings to fit with the current patterns and observations reflected in today’s work environment.

Bill Bonnstetter, the developer of TTI’s popular DISC assessment is one of the most recognized contributors to this field and it’s his modern day DISC assessment that I will use as an example.

What is DISC & MBTI

Before we can dive right into looking at the differences between the world’s two most popular personality assessments, it helps if we understand what they are to begin with.

DISC is often referred to as “the universal language of observable human behavior.”

The reason behind this is that in every culture studied, the DISC model has been found to be valid (Bonnstetter).  Whether you speak English or Swahili, the tools and science behind DISC can be used transparently.

What DISC does measure is HOW you do what you do.  It is a measure of one’s OBSERVABLE behavior.  And lastly, it is a neutral language.  Meaning, there are no good or bad behavior styles in the DISC method.

The meat of today’s DISC is in the four dimensions that categorize behavior.

The level of each of these dimensions determines what DISC style you have.  Your style is often noted by whichever dimension you scored highest in, followed by any other dimensions that were above the energy line as well.

For example, if people asked what style I was on DISC, I’d tell them I’m a C.  But because my S and I are also above that energy line in the center, I can mention I’m a C/S or a C/S/I if I liked.

Because you can score within a wide range of numbers under each style, there’s a lot of depth to each individual’s score.  A certified professional behavioral analyst could look at your graph and describe you fairly accurately.

Lastly, DISC differentiates itself from “personality assessments” further by delving into the interpersonal relationships side of behaviors.  Meaning, those trained in reading these tools can compare two contrasting DISC reports and predict rather accurately where conflict or harmony could arise.  Using this insight, coaches can then help individuals or teams recognize these differences or similarities and turn them into assets.

Jung measured this using the “bipolar dimensions” mentioned earlier, by having two dimensions scored in an either or format.

Differing from DISC’s method of measuring levels of each style, Jung believed, “that while both facets of a bi-polar dimension are present in personality, one is emphasized more than the other.  In fact, an individual may use one consciously and with deliberate intention, while the other influences behavior only unconsciously.”

The four dimensions are described as follows.

1.  Extroversion (E) vs Introversion (I): Individuals pay more attention to either the external world of objects (extroversion), or the inner world of ideas and feelings (introversion).

2.  Sensing (S) vs Intuiting (N): Individuals naturally prefer to use one of two functions. Either sensing what the objective facts are (reality) or intuiting relationships and possibilities (imagination).

3.  Thinking (T) vs Feeling (F): Individuals process and evaluate information one of two ways.  Either by using logic and objectivity (thinking) or subjectivity and personal values (feeling).

4.  Judging (J) vs Perceiving (P):  Individuals deal with the outside world two different ways.  Either you prefer structure and firm decisions (judging) or you prefer a world that’s more open, flexible, and adaptable (perceiving).

After answering 93 of these force based, either/or questions you are given the initials that correspond to your results.

For example, if I had scored more frequently than the counterpart in Extroversion, Intuiting, Thinking, and Judging, my MBTI would be ENTJ.

There are a total of 16 types a person can be and they are all fairly well documented if you wanted to learn more about your style.

So what are the biggest differences between DISC and MBTI.  Let’s talk about them below.

DISC is a bit more complicated.  Since a person could score anywhere from 0 to 100 for each of the D, I, S, and C styles this leads to over 20,000 combinations when you compare all four dimensions at once.  However, TTI found that 99% of the population tended to fit into 384 combinations (Bonnstetter).

TTI has simplified this further by creating a visual wheel of the 60 most popular combinations and where they line up in the quadrant system. 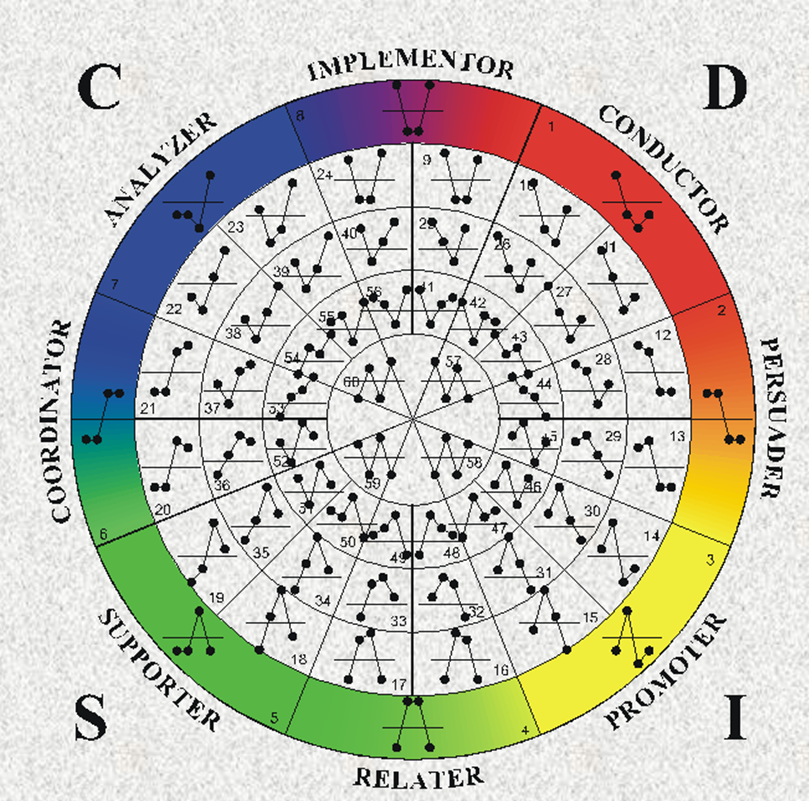 Dr. Russell J. Watson, a behavior researcher, when asked about the difference between DISC and Myers-Briggs said it comes down to thinking versus acting.

3. Measuring How You Adapt vs How You Behave Naturally

When I was a kid I had two personalities depending on where I was.

When I was at school I was a perfect little angel.  But when I came home I was an annoying older brother who did his fair share of trouble making.

I’m sure many of you can relate, and even as adults we still might adapt how we behave at work versus home.

Myers Briggs only looks at how you would behave naturally, most likely the way you’d be at home.

DISC on the other hand looks at both of your behavior styles; natural and adapted.  They do this so they can find areas that are causing you stress on the job and help you understand why you might feel burned out.

“Personality assessments” are becoming more and more popular not just in helping people find career fits, but for hiring as well.

Therefore, you want to make sure the tool you are using provides not only accurate results but that it’s reliable as well.

Again not all DISC and MBTI instruments are the same, meaning don’t expect that free DISC or MBTI test you took to stand up to the validity and reliability of the $100 versions.

That being said, how do DISC and MTBI stack up to the validity tests and standards Psychology and Educational associations expect?

DISC is a business tool for a number of uses including coaching and hiring so it’s crucial that distributors can assure their clients that the assessments they are using are valid.

TTI has a practice of hiring independent statisticians to validate all their questionnaires every few years.  These statisticians check to see that the tools meet or exceed the specifications published in Standards for Educational and Psychological Testing.  These are the standards against which many US-based and international assessments are designed and validated.

In addition, when it comes to hiring, TTI has had a perfect track record of having no EEOC complaints filed against clients using their DISC assessments in the hiring process.

You can find their validity results here.

If you are looking for scientifically validated assessments MBTI might not be your first choice.  Numerous articles such as this one, “Nothing Personal: The Questionable Myers-Briggs Test” are calling into question its flaws of being scientifically untestable and reliant on binary choices; your either 100% introvert or 100% extrovert.

In addition, studies have found between 40 and 75 percent of test-takers receive a different result after taking the test a second time.  Furthermore, The Committee on Techniques for the Enhancement of Human Performance and the National Research Council suggests that “…there is not sufficient, well-designed research to justify the use of MBTI in career counseling programs. Much of the current evidence is based on inadequate methodologies.”

However there’s so much criticism it’s hard to feel confident that MBTI is a tool that should be considered for its scientific validity and reliability when it comes to hiring or your career.

But that might be okay if you go into it knowing these limitations.  The problem arises if it is predominately used in the workplace by HR departments and coaches who can clearly be unaware of its shortcomings.

Another major difference is in how the assessment is conducted.

In a MBTI, you are given a statement like the following.

You are more interested in a general idea than in the details of its realization.

In a DISC assessment (again going off of TTI’s DISC structure for consistency) you are asked questions in a different way.

For each group that follows, rank them in order of MOST to Least.

– Obedient, will do as told, dutiful

There are pros and cons to both methods.  Many people aren’t comfortable saying they are definitively one way or another, as the MBTI asks.

Likewise, when you are making a choice from four separate lists of words, you’re going to have some sets that all describe you well.

6. How Do You Compare to Others?

MBTI doesn’t set out to compare how your score compared to the general population, instead it’s goal is to simply offer further information about your own unique personality.

DISC however has a section of the report designed to rank and show how your natural behavior style compares to the rest of the population that has taken this assessment.

How to Get Your DISC or MBTI

Now that you are more informed about the differences of DISC and MBTI, how do you get assessed?

Generally these kinds of assessments are in the hands of thousands of distributors.

A simple Google search will help you find a number of coaches that can offer you an assessment.

If you are looking for DISC, we offer a competitive package here.

Did we leave any of your questions off?  Leave them in the comments below.