Lessons from Real-Life Careertopians: Emotional Intelligence Puts You Ahead of the Game

Well, Careertopians, you really knocked my socks off. 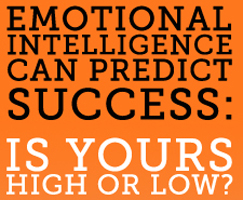 It’s been a few weeks since our webinar on how Emotional Intelligence Predicts Career Success, and we’re still getting feedback from it.

Seems that folks liked the Self-Awareness Quiz, the Richard Sherman video, and the “Know Your Triggers” discussion.

But the best part?

I’d say the best part of the webinar were the comments shared by the group – via the chat window during the presentation.

If you missed it, you can view the webinar replay here.

Or maybe you’d just like the highlights? Read on.

The most entertaining examples tend to be those regarding low Emotional Intelligence. And you know what that means: bad boss stories.

Rhonda shared, “One of my first bosses asked me if my husband had been beating me in the head. Another boss called everyone in the room imbeciles.”

And then Bill reported once overhearing a boss say, “I don’t need to pat them on the back. They’re big boys & girls. They know when they’re doing a good job.”

That boss wasn’t exactly creating loyalty within him team, was he?

Where Do You Stand?

All progress begins with telling the truth, so that’s what we did. Acknowledging our gaps is valuable in order to discover how to improve on them.

Kristen acknowledged, “I tend to repress emotions or compromise my own well-being instead of dealing with them in an effective way. Am working on that.”

Louise kindly shared, “I have a face that turns downward in repose….so even when I am feeling neutral of am just listening, people tell me they think I am cross. People have said that I intimidate them. I have to consciously ‘lift’ my expression when I walk around the office, listen, or sit in meetings. Sometimes I forget and am unaware of messages people are receiving that I didn’t know I was sending.”

One of the tips to improving Emotional Intelligence is to know your triggers: what sets you off.

Trisha: the person who always has to top you

Rhonda: Seeing bullying toward people who can’t or don’t fight back

As discussed in the webinar, knowing your triggers allows you to respond – versus react-  when issues pop up.

Knowing what sets you off is helpful, but it’s also necessary to have a technique or two in your pocket that’ll help you respond to the trigger.

We shared a few with the group, but a few folks had tricks of their own to share.

Shelly reported, “I allow myself a specific amount of time – one week, one day, one hour, etc. – to be angry. Then I specifically agree to spend some mental time on forgiveness. It allows me to feel my feelings but also not to act drastically in the heat of the moment because I know that I will have to forgive.”

And Trisha explained, “I grew up a lot once I realized that other people can act in outrageous ways, so I’m able to keep from being appalled. It makes it easier to take things in stride.”

So thank you, Careertopians, for adding so much value to our Emotional Intelligence webinar. Our growing community sure has a lot to offer – we appreciate you!