Hate Networking? Up Your Game. 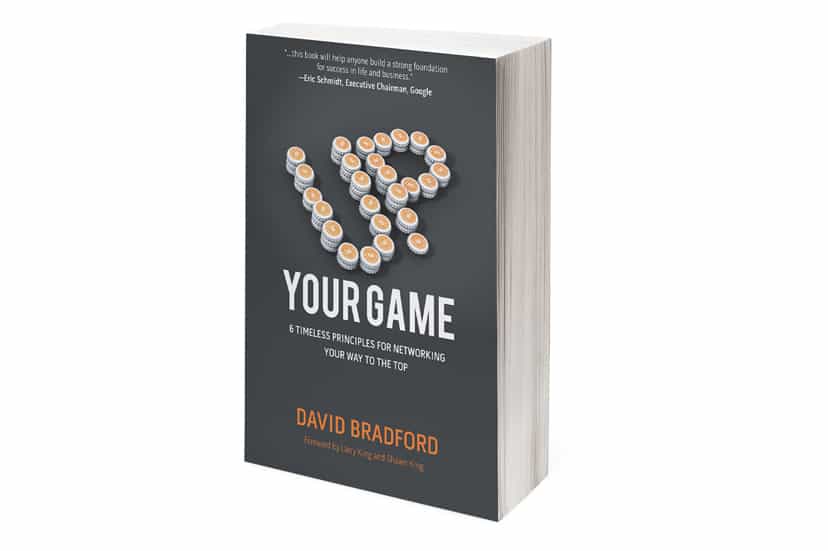 You apply to job listings and don’t get an interview. You call on hopeful leads, but they vanish. You’re working hard, but you can’t seem to find the door to your bright future.

Those statements are paraphrased from David Bradford’s book, Up Your Game: 6 Timeless Principles for Networking Your Way To The Top.

If you shiver or gag when “networking” is mentioned, you’ll love this book. Basically, it’s the antithesis of networking as you know it.

Known as the Bottlecap Kid – a nickname acquired from a valuable childhood experience he shares – Bradford is currently the Executive Chairman of HireVue, and previously served as Chairman & CEO of Fusion-io.

His definition of networking is perhaps the best I’ve seen:

“Networking, simply stated, is doing everything you can on a regular basis to secure and expand your personal relationships in order to increase the likelihood for success – your own success and the success of others.”

And he has the stats to back up his statement, with a LinkedIn network that gives him access to over 30 million people directly or through a connection. Add in Facebook, Yahoo, and Google+ and there’s another 17,000 direct connections.

“Great,” you say. “But does he actually interact with those people?”

Because they’re all organized into categories for easier access when he has industry-specific info to share, a golf foursome to complete, or an executive-level job opening to fill.

And even though he is a fan of the efficiency of today’s social media tools, he states, “Remember this important point: These social media tools are only methods of connecting with people. It is the people that matter, not the tools.”

Of course, the first thing I wanted to know was how he became so committed to building such an voluminous network.

During law school, he suffered a harsh lesson, discovering that good grades were only part of the formula to securing a valuable clerkship. The real key? Connections.

After bulldozing his way into a SoCal law office and creating a clerkship opportunity, he immediately began making connections.

And every step of the way he remembered that networking is all about giving before receiving.

Woven in between actionable steps on how to develop social capital and grow your network, Bradford shares lessons and stories from his impressive career.

Sharing impressive outcomes that we might otherwise incorrectly attribute to luck, Bradford provides step-by-step breakdowns of how specific actions of thoughtfulness have led to pivotal moments and opportunities in his life.

The book’s forward – written by Larry & Shawn King – effectively sets the stage for Bradford’s message that successful networking requires an authentic, sincere interest in people. King also states that the book “will be of great value to people trying to advance their careers, regardless of where they are in their journey.”

I fully agree. Some years ago, once I shifted my thinking from “networking” to “helping friends and acquaintances”, my connections grew and grew. Now, I’m regularly contacted about side projects and job opportunities, even though I regularly express that my plate is full and I’m happy in my current position. Who knew? Well, David Bradford, for one.

So if you’re looking to increase your likelihood for success – as well as the success of others – be sure to check out Up Your Game: 6 Timeless Principles for Networking Your Way To The Top.

Maybe you should even send a copy to a colleague. After all, that’d be a thoughtful & sincere move on your part, wouldn’t it?