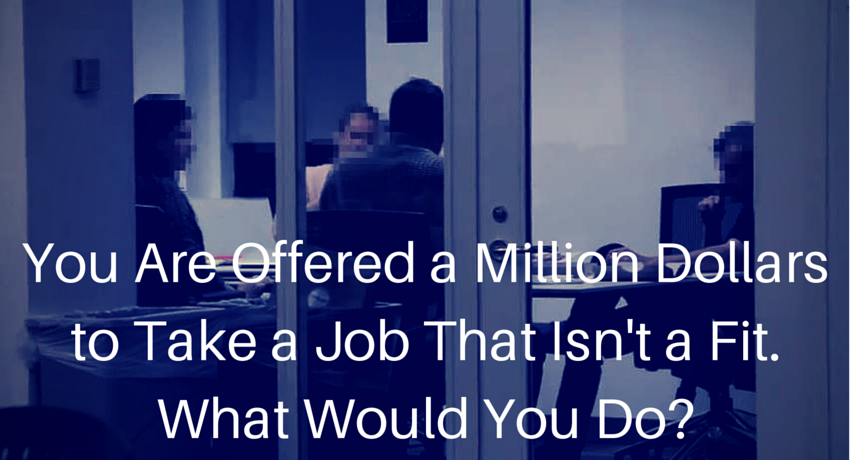 What would you do if you sat in a New York City Office, in front of a handful of top ad executives, offering you a million dollars to be part of their advertising campaign.  The only catch was you had to live in NYC for the next year.

Most of us would take it in a heartbeat. Pack the bags, board the plane, game on!

But internet celebrity, Jerome Jarre couldn’t do it. And after hearing his story, I couldn’t blame him.

No, there weren’t any hidden tricks or stipulations. These were genuine business folks trying to negotiate a pretty appealing deal.

So why did Jerome turn it down? And why do I agree with his decision?  You’ll have to watch the video below to get the full story, but basically it all comes down to putting yourself first.

When it comes to jobs, we usually do the exact opposite. We let the job come before ourselves.

We see a salary that is higher than what we’re paid currently, and immediately assume it will make us happier.  And sometimes that money does make you happier.  But eventually, the thrill of the new fades away, and the day to day of doing something that isn’t fundamentally who you are, wears away at you. You burn out. You feel exhausted. You aren’t happy.

Mark Twain once said, “There are two important days in your life. The day you are born and the day you find out why.”

Jarre learned this at an early age. After running away to China he met Chris Carmichael, a mentor and fellow traveler, who asked a profound question that stuck with Jarre the rest of his life. He said to Jarre, “Imagine you are 99 years old, on your deathbed. All of a sudden you have the chance to come back to right now.  What would you do?”

It wasn’t an easy question to answer, but it got Jarre thinking more seriously about who he was and what he wanted to do with his life.  And whenever he was in a tough situation, he’d ask himself that question once again.

I’m interested to see where his journey to happiness takes him, and think his video could inspire some of you as well.