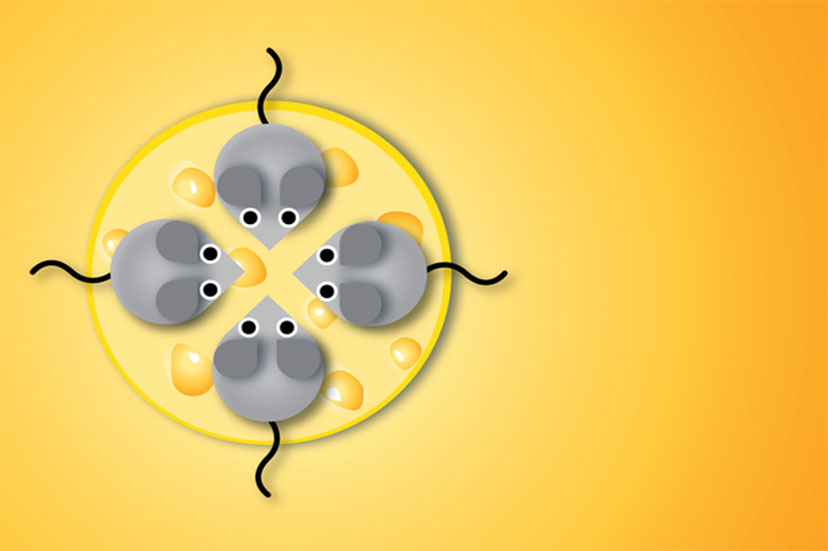 Perhaps you’re just starting out in your career and want to aim for something a little less ordinary.

Or maybe you’ve been working for a while and are feeling the need for a career change.

Whatever your reason for “moving your cheese,” know this:

If you keep your eye on your goal – and are prepared to be flexible – you can propel yourself into a satisfying and fulfilling work situation. One that allows you to take control – and feel in charge of – your own life.

You can do it. I speak from experience. Move that cheese!

Moving What? Did She Say Cheese?

So what’s this cheese thing I’m talking about?

An eon ago (1998), Spencer Johnson wrote a book called Who Moved My Cheese.

It’s a parable that follows the exploits of four mice who wake up one morning to find that their cheese has disappeared. In the tale, two of the mice immediately set off to find more cheese while one mouse stays in place, paralyzed with fear.

The fourth mouse – after several starts and stops – overcomes his apprehensions about leaving his cozy, undemanding spot and heads out to find more cheese.

How many of us find ourselves in the same situation? Unhappy and stuck, yet afraid to make a change for the better.

We rationalize, telling ourselves that our families depend on us, that the economy is bad, that we’re not fully prepared to make a move. That a career change is just too risky.

But what we’re actually doing is ignoring our abilities, our potential, and our own dreams.

So How Do You Know So Much?

See, I worked as the coordinator of a local tourist information center for 13 years.

It was a pleasant job with few demands. I worked with a lovely staff of people, met interesting tourists and felt needed. My own dreams — to write, to expand my own small guesthouse and to try some new avenues — were relegated to the back burner.

I was so busy encouraging my family and friends to reach for the stars that I didn’t dare do so myself.

One day someone said something to me that really hit home. And within days I gave notice at work, preparing to venture out. I had a little severance pay on which to draw and some clients for whom I had worked side gigs on a part-time basis.

If someone was to ask me whether they should follow my example I wouldn’t hesitate to recommend that they take the step. I would, however, offer a few suggestions to cushion the move.

Tips to Prepare for a Major Career Change

1. Prepare for your move by taking on some part-time work in the evenings/weekends while you’re still working at your full-time job. These extra jobs can serve as your springboard when you make your move.

2. Network. While you’re still working, develop a good Linked-In profile and reach out to contacts who are connected to the field that you wish to enter. Create your profile in a way that features the type of field that you wish to explore so that you attract other contacts who work in that field. Join Facebook and Linked-In communities that bring people together. Get active in these groups by posting frequently so that your name becomes recognized as a knowledgeable and active group member.

3. If you’re thinking of becoming a freelancer, check out the Small Business Administration courses that are offered in your area. In addition to the knowledge that these courses present, you’ll have a chance to do some face-to-face networking with other small business-owners. You can also find numerous online courses about almost every subject that will preepare you for your move.

4. Don’t burn any bridges. Sure, those videos of people who film their quitting speeches/songs can be funny but the more people that you have behind you, rooting for you (and prepared to give you references) the better off you’ll be.

5. Write out your plan. Don’t wing it (even though that’s what the hero-mouse in Who Moved My Cheese did) — create a firm plan that will allow you to map out the moves that you need to make to reach your goal.

6. Don’t trade one lousy job for another. Even if you’re not happy at your present job, don’t make the move unless you have delineated your goals and created a plan of action. Don’t be naïve…..making this move is a strain, so you don’t want to do it more than once.

I continued working for two months after I gave my notice. And during this period, I tried to keep these points in mind as I prepared for my next stage of my work life.

And in the end, my co-workers gave me a going-away party at which they served…..cheese.

About the Author: Laurie Rappeport lives in Safed Israel, known as the “City of Kabbalah.” She actually has nothing to do with Kabbalah, but loves to bring visitors to her town. Laurie is a content writer and an online educator but her passion involves promoting Safed through her writing.