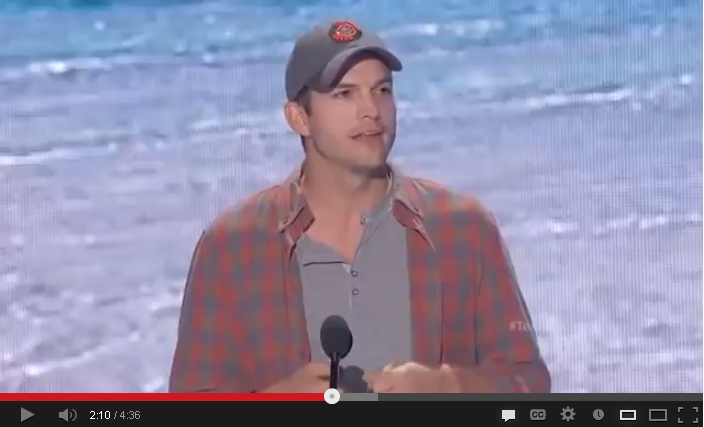 I know, I know, I’m late to the party.  By now Ashton Kutcher’s surprising acceptance speech at the Kid’s Choice Awards has popped up on your Facebook feed over a dozen times by now.

And if you’re like me, you see these kind of videos all the time and think to yourself, “meh…I don’t have time for that right now.”  And so, off it goes to whatever viral video graveyard your brain has plotted…right next to Kid President’s Pep Talk and Randy Pausch’s Last Lecture.

So after seeing friend after friend, site after site, recommend I go watch this video, I finally broke down and said, “Alright, I’ll do it. I get the hint.  The Youtube Gods demand it!”

Five minutes later I was reminded of the words I wrote after reading Tina Fey’s Bossypants, “we don’t give comedians enough credit for their business smarts.”

But before I go into exactly what those “insider secrets to a better career” are, here’s the video to see for yourself.

Before Kutcher was a TV star and movie celebrity, he was Chris.  And while he was Chris he learned three things that really made his career shine.

“I believe that opportunity looks a lot like hard work.

And I’ve never had a job in my life that I was better than.

I was always just lucky to have a job.  And every job I had was a stepping stone to my next job.

And I never quit my job, until I had my next job.

2. Be Smart. Be Thoughtful.  And Be Generous.

“The sexiest thing in the entire world is being REALLY smart, and thoughtful, and generous.

Everything else is crap.  I promise you.

Be smart.  Be thoughtful. And be generous.”

3. Don’t Live Your Life…Build One

“Steve jobs said, when you grow up, you tend to be told that the world is the way that it is.  And that your life is to live your life inside the world and try not to get in too much trouble.  And maybe get an education and job and make some money and have a family.

But life can be a lot broader than that if you realize one simple thing.

And that is that everything around us, that we call life, was made up by people that are no smarter than you.

And you can build your own life that other people can live in.

So build your life.  Don’t live one, build one.”