7 Characteristics of People Who Have True Lasting Happiness 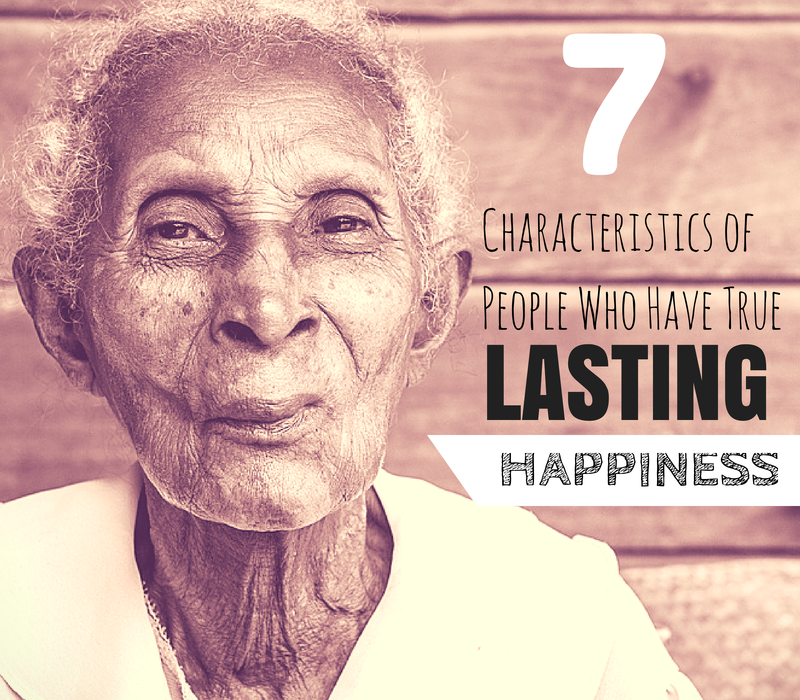 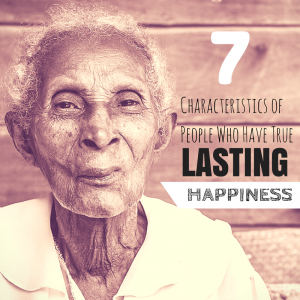 A few weeks ago my Grandma passed away peacefully at 90 years old.

As most people do on such occasions, my family and I hopped on a plane to Heber City, Utah to prepare and attend her funeral.

For the last decade or two of her life, my Grandma lived a simple, yet fulfilling life. If you’ve ever been to Heber City, you’ll know it’s not the biggest town you could visit. They just barely got a Walmart in the last five years, and they still don’t have a decent movie theater with more than ten screens.

But that was how my Grandma liked it. She enjoyed keeping up her modest garden and taking in the beautiful views of the mountains and lakes just minutes from her house.  In her basement you could find a working typewriter, an old workshop bench, and plenty of blankets. The simple things in life.

The point is, she didn’t have much in today’s sense of what “should” make us happy; fast cars, iPads, shopping centers, big screen televisions.  Yet she lived a very happy life.

I’m sure it’s no surprise to you that happiness doesn’t come from the “stuff” we own, but the character we build. It was something my Grandma had done, but I’m still miles away from mastering. But it got me thinking. What exactly are the characteristics of people with lasting happiness?

So I did some research, looked at the themes commonly discussed in the world of happiness psychology, and collected my thoughts below. If you want to have lasting happiness, these are the six traits to strive for.

They Are Satisfied With Having Their Basic Needs Met

Studies have found very little difference in happiness between those who have much compared to those how have just enough. Of course if you’re struggling to make ends meet, you’re probably not going to be as happy as the person who’s sitting on a healthy savings account, owns a house, and has a retirement plan waiting for him, but once you hit a certain income, money stops buying happiness.

In fact, one study showed that the average life-satisfaction level for the Inughuit people of northern Greenland was virtually indistinguishable from that of American billionaires, despite the enormous difference in material possessions and wealth.

In a day and age where ads are inundating every facet of our lives, it’s a challenge not to be tempted to think more is better. But those who can find peace in having just what’s necessary, without overdoing it, may be on to something. 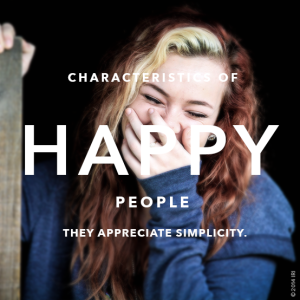 Tal Ben Shaar in his book Happier: Learn the Secrets to Daily Joy and Lasting Fulfillment summarizes this point perfectly. “When there are too many competing demands on our time and attention, our ability to be present is diminished – and with it, our ability to appreciate and enjoy the experience.”

Henry David Thoreau was stressing this back in the 19th century, “Simplicity, simplicity, simplicity! I say let your affairs be as two or three, and not a hundred or a thousand; instead of a million count half a dozen.” If those times could be considered chaotic, imagine what it must feel like today?

Our culture puts a lot of pressure to do more, own more, and see more. Everyday we are faced with the new and exciting travels, experiences, and purchases being shared on Facebook and social media. And it feels good to share our own experiences and luxuries when those times happen in our own lives. But this happiness is not lasting.

Compare that to the peace you feel when your plate is empty vs full. When you have a day to relax instead of racing off to the next big thing.

They Are Dedicated to a Cause 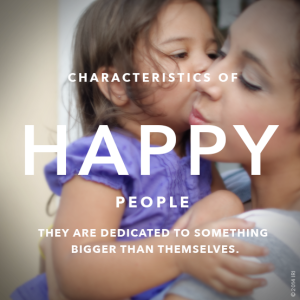 Happy people are usually invested in something bigger than themselves. You’ll see them volunteering on their weekends for a cause that’s meaningful to them.  You’ll see a passion in their heart.  You’ll see an energy you’re jealous of experiencing for yourself.

A cause can be different for different people.  Maybe for you it’s your religion. Maybe you’ve successfully battled cancer and now are an aid to others facing the same challenge. Or maybe you’ve overcome an incredible addiction to alcohol and are helping others escape its grips as well.

People who are dedicated to a cause don’t do it because they think it will make them successful, they do it because it gives them a sense of purpose.

Viktor E. Frankl, a holocaust survivor, once said, “Don’t aim at success. The more you aim at it and make it a target, the more you are going to miss it. For success, like happiness, cannot be pursued; it must ensue, and it only does so as the unintended side effect of one’s personal dedication to a cause greater than oneself or as the by-product of one’s surrender to a person other than oneself.”

They Use Their Personal Strengths to Help Others 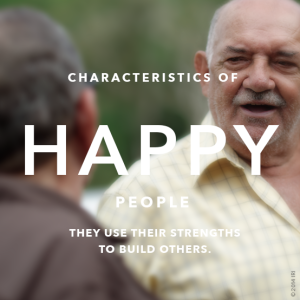 Don’t worry if you’re still unclear about your own strengths, let alone helping others you can see how we help people discover their talents over here.

But in the mean time, I want to share a fascinating study conducted by the La Follete School of Public Affairs.

“The study looked to two large-scale longitudinal studies to make the connection between helping others at work and happiness. Researchers examined the Wisconsin Longitudinal Study, which surveyed 10,000 Wisconsin high school graduates from the class of 1957. They found that people who said in their mid-30s that helping others in their work was important were apt to report being more satisfied with their lives nearly three decades later.”

They Foster Friendships and Family 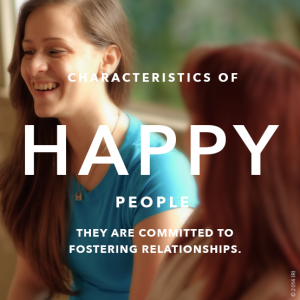 Earlier, we reported on some of the stats behind who makes it and doesn’t make it out of the bottom income brackets.

Just being raised by married parents increases your chances of making it to the top 40% of earning potential by 25%.  Thus giving you a better chance of making a living that can satisfy your needs.

But, friendships and family help more than just income potential. Science shows happiness may be contagious among friends and close relationships.

Meaning, happiness is contagious. When you or your friends are happy, you’re more likely to spread and feel that same happiness.

They Have a Sense of Purpose 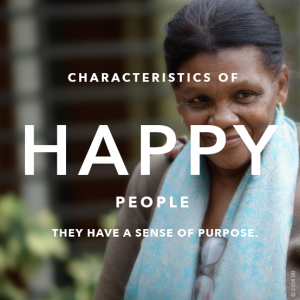 There are two types of happiness hedonic and eudaimonic. One (hedonic) is short lived, in the moment, and easy to trick. The other (eudaimonic) is long lasting, built on a foundation, and sustains us.

We can obtain the first type of happiness rather easily. Eat some chocolate, watch a tv show, or buy something nice for yourself.  But the happiness you achieve from such methods, will last for a few moments.  The other type of happiness (eudaimonic) takes much greater effort.  Researchers from UCLA found the latter source of well being to come from a deep sense of meaning and purpose in life as well as doing good for others.

“Using a questionnaire, the researchers assessed the level of both types of happiness in 80 individuals. Then Cole and his team took blood samples from the participants in the study and examined which genes were turned on or off in the cells of each one’s immune-system.

They found that individuals with a strong sense of hedonic well-being showed high inflammatory gene expression and low expression of antiviral and antibody genes—meaning that their reaction to adversity would be similar to that of people under stress and anxiety.

In stark contrast, individuals with a strong level of eudaimonic well-being had the exact opposite traits. They were happy and, genetically, they were healthy. But both types of individuals “seemed to have the same high levels of positive emotion” and their “emotional states were similarly positive,” Cole says.

Basically, the human genome is much more sensitive to different ways of achieving happiness than our conscious minds.” 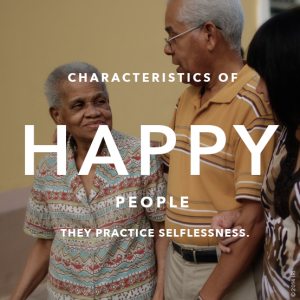 Concrete acts of kindness are another act found in truly happy people.

Authors Gary Morsch and Dean Nelson explain that “while the scientific evidence shows we are wired toward altruism, there is still a choice involved. The beauty of the choice is that, when we choose to serve others, something wonderful happens.” And what kind of wonderful thing might that be? Morsch and Nelson describe what one group experienced after helping repair a building damaged by a hurricane: “They felt their lives meant something while they were doing something for someone else. They had helped someone in a concrete way, and it made them feel alive. They didn’t say it made them feel good. Lots of things can do that. This brought them to life.”

How to Build Lasting Happiness

Unlike other things in life, lasting happiness isn’t a goal only a privileged few are capable of obtaining. That’s what’s so great about it. It doesn’t matter if you’re a tribesman living in the Amazon or a billionaire in Hollywood, lasting happiness is something everyone can achieve if they really work on it.

Someone that’s satisfied with the basics.

Someone that appreciates simplicity.

Someone that’s dedicated to a cause.

Someone that uses their personal strengths to help others.

Someone that fosters friendship and family

Someone that has a sense of purpose

For the last couple years I’ve found joy in helping our readers find happiness in the work they do. I’m far from having these characteristics myself, but I’ll get there one day.

Hope you can do the same.